This post was updated on December 12, 2020. This page may contain affiliate links.

Connect with other national park enthusiasts by joining The National Park Travelers Network on Facebook. 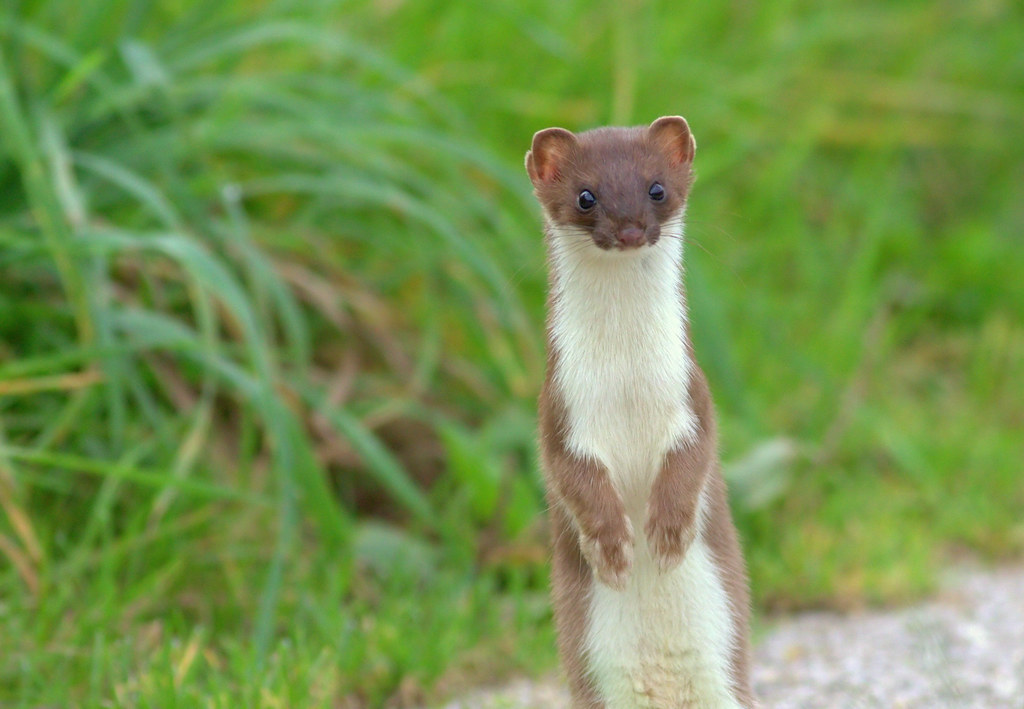 When to Look for Wildlife

Animals tend to be most active around dawn and dusk. However, the best time depends on what you hope to see. For example, some animals are nocturnal, such as bats. Others, like bears, hibernate during the colder winter months. Be sure to think about these logistics ahead of time depending on the animals you’re searching for. 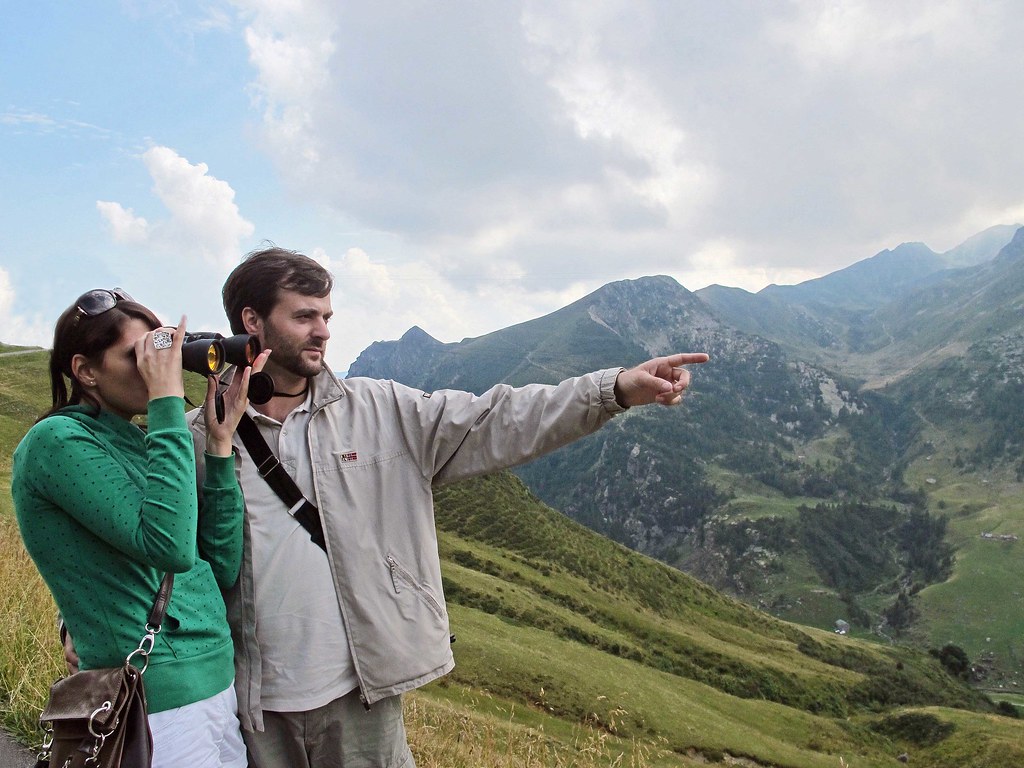 First and foremost, you’ll want to capture your wildlife sightings. Bring along a decent DSLR camera and telephoto lenses or zoom lenses. If you can’t afford these, I find my Canon Powershot has a really powerful zoom in a small, affordable package. If you aren’t hoping to capture images but still want a better look at animals from a safe distance, bring a pair of binoculars. You may also be interested in carrying animal tracks or animal scat guides so you can identify signs of wildlife you see when exploring national parks.

The Best National Parks for Wildlife Sightings in the United States

Big Bend National Park is one of the most unique national parks in the United States. One of my favorite things about this park is the variety of ecosystems and habitats. This grants the park a long, diverse list of species that makes it one of the best national parks for wildlife viewing.

In the mountainous Chisos Basin, you may see Mexican black bears or Bighorn sheep. In the more desert landscapes below, look out for javelinas, coyotes, jackrabbits, or mule deer. Furthermore, Big Bend National Park is one of the best places in the country to see hundreds of birds during annual migrations. In fact, according to the park’s Chief of Interpretation, there are “more species of birds, butterflies, bats, scorpions, ants, reptiles and cactus than any other unit in the National Park Service.”

Channel Islands National Park is nicknamed the Galapagos of North America. Why? Because it is one of the best national parks for wildlife viewing in America.

Channel Islands is known for having a plethora of endemic species you can only find on this unique set of isles off the coast of Southern California. There is also amazing diversity in the types of animals you can see here. Despite the small size of these islands, they are teeming with mammals and birds. In the surrounding waters, marine life migrating to warmer seas are often spotted during the boat ride.

Alternative: Acadia is another place to see hundreds of birds and migrating marine life.

Plan Your Trip to Channel Islands and Acadia National Parks

One of my favorite national parks for wildlife sightings is Denali National Park. Thanks to their robust bus system, you are riding higher above the landscape with hundreds of extra eyes scouting for animals.

Denali is one of the best places to safely see grizzly bears in the wild. The park is also home to other species not commonly found in the rest of the United States, including arctic ground squirrels, wolverines, and golden eagles. In the fall, moose rut is an exciting time to see bull moose with large sets of antlers while migrating sandhill cranes fly overhead. In peak years, you’ll also find a large number of snowshoe hares or Canada lynx depending on the timing of their cycles.

Nearby Alternative: Wrangell-St. Elias is another park you can drive to and search for animals.

Plan Your Visit to Denali and Wrangell-St. Elias National Parks

Around the campground and beaches, you’ll find hundreds of hermit crabs, especially at night. The campground is also home to rats pilfering for food.

Walk along the moat walls and peer into the ocean below for a chance to see amazing fish or even sea turtles. Furthermore, the park sees hundreds of migrating birds every year. The next key over, Bush Key, is closed to the public to protect these important species. Don’t forget your binoculars!

Few parks have more wild animals than Everglades, making it one of the best national parks for wildlife.

This is the only place on the planet where you can see both alligators and crocodiles due to the brackish water. The park’s distinct districts help provide prime habitat for a variety of species.

On the Gulf Coast, take a boat tour to search for pelicans, dolphins, and manatees. Visit Shark Valley to find alligators, egrets, herons, and hundreds more birds. Next, visit Flamingo for a chance to find crocodiles, manatees, and even flamingos.

Before the introduction of the invasive Burmese python, you could see many more mammals in the park. Now, it’s becoming increasingly rare to see even a raccoon. Protect wild animals – don’t abandon your pets in the wild.

Nearby Alternative: Big Cypress National Preserve is nearby and features many of the same animals with half the crowds. 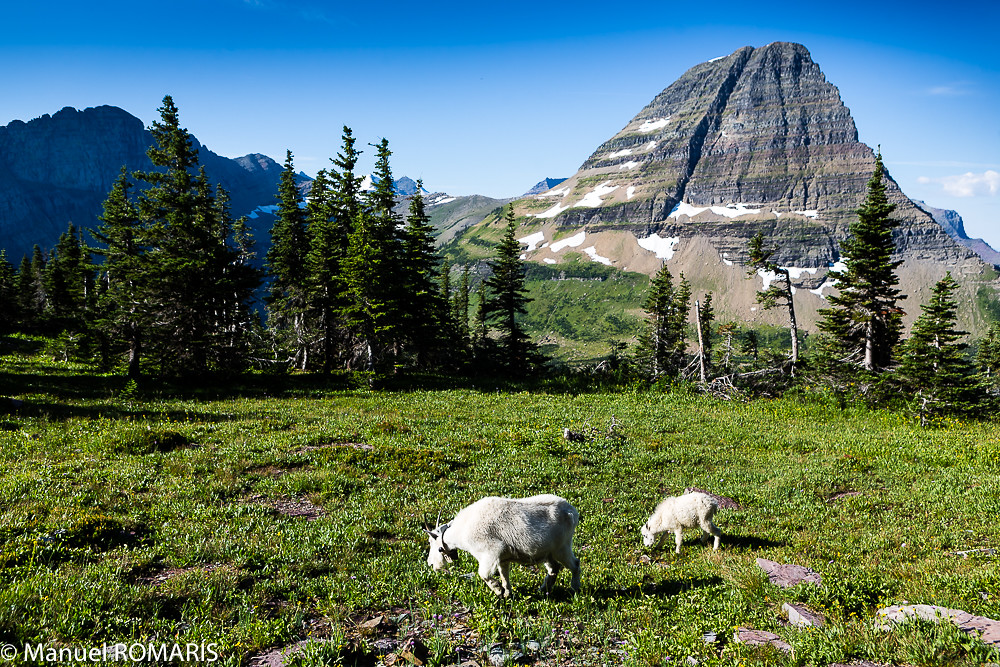 In northern Montana, Glacier National Park hosts a plethora of exciting species. While hiking the park’s many trails, you may see mountain goats, bears, pika, or marmots while birds fly overhead.

The park features two types of bears (brown and black) in addition to multiple ungulate (hooved) species. You may see elk, bighorn sheep, deer, or mountain goats during your visit. In addition to the variety of small mammals, Glacier is easily one of the best national parks for wildlife.

Plan Your Visit to Glacier and Rocky Mountain National Parks 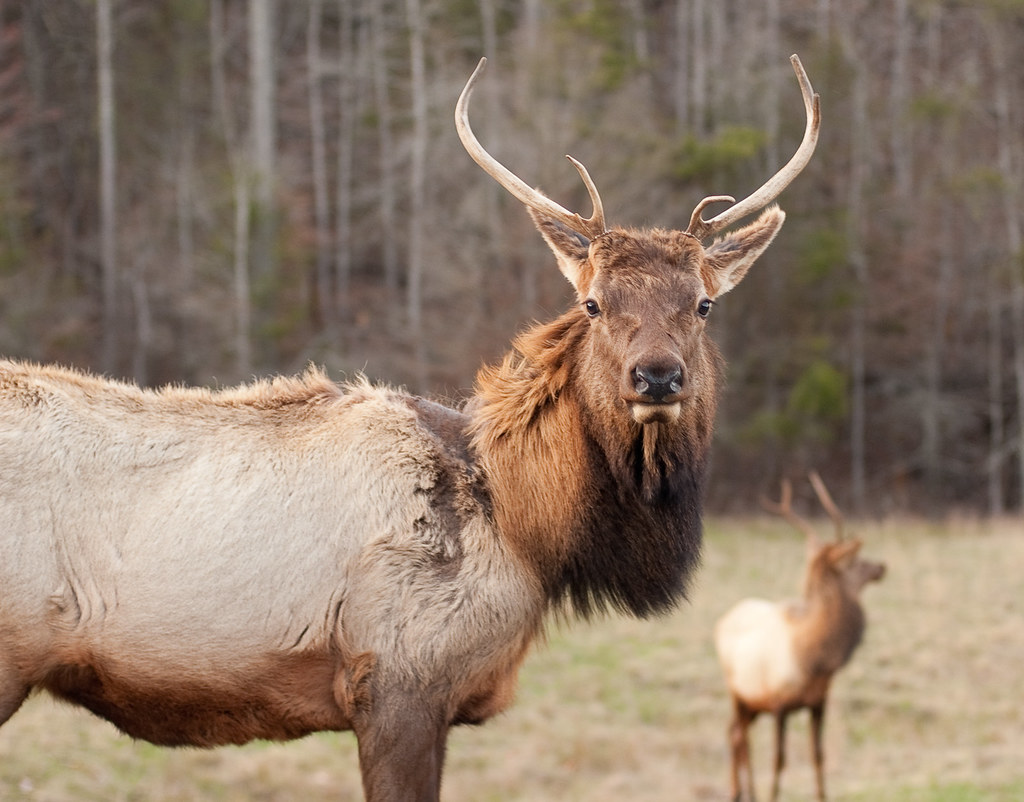 Many of the parks on this list are found on the west coast, but that doesn’t mean that the east coast doesn’t have amazing national parks for wildlife. One of those places is Great Smoky Mountains National Park.

In addition to a few ungulates, like white-tailed deer and elk, you can also find the usual mammals here, including bears, coyotes, foxes, and more. There’s also a special event every year when an influx of fireflies shine their bright lights.

One of the best places for wildlife viewing in the Smokies is the Cades Cove Loop Drive. For elk, take a drive to Cataloochee Valley. Be sure to add these to your itinerary!

For an entirely different array of animals than any other national park on this list, head to Hawaii. You’ll see more endemic species here than any other listed here. This includes the state bird, a type of goose called the Nene.

Other birds you may see include the io and honeycreepers. Keep your eye out for some cool insects as well, such as endemic caterpillars or giant dragonflies.

Also in Hawaii, you will likely find hawksbill sea turtles. 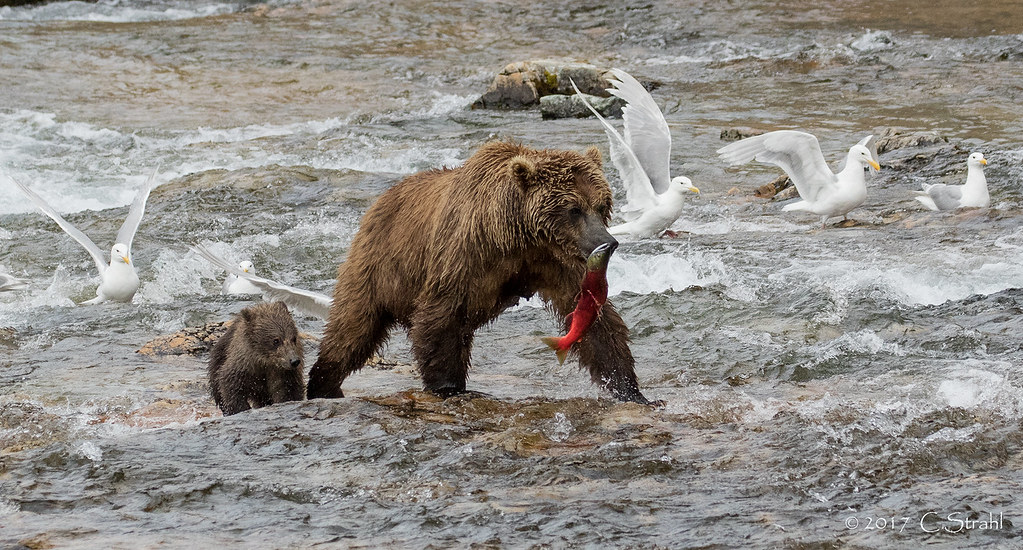 Is there a more famous national park for wildlife than Katmai? At its famed Brooks Falls, hundreds of grizzly bears arrive every summer to hunt for salmon. You can also see a few birds here, but the grizzlies certainly steal the show. Much larger than those in the interior of Alaska (in parks like Denali and Wrangell-St. Elias), it’s worth the flight to visit this amazing park.

Alternative: Lake Clark is another great place to see grizzly bears in the wild. 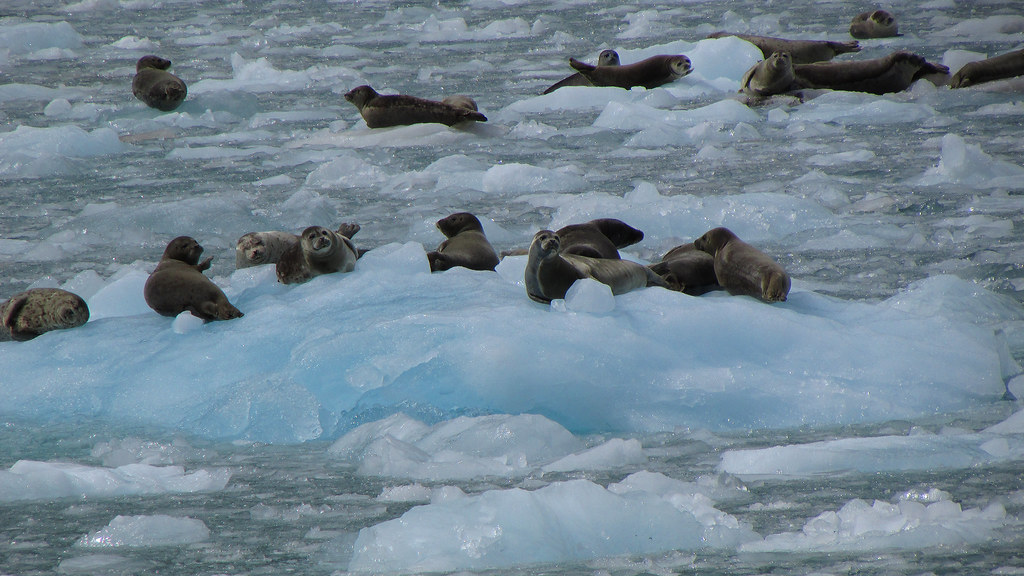 Also in the Great White North, Kenai Fjords is home to many different species than the other Alaskan national parks for wildlife on this list.

On their popular boat tours, you have the opportunity to see migrating whales, seals, sea lions, porpoises, and so much more. From the docks, keep your eye out for bald eagles roosting above or otters floating in the waters. On our tour, we actually saw mountain goats as well!

Famous for the wild horses that roam free, Theodore Roosevelt National Park is home to an array of animals.

One night camping in the south unit, I heard owls hooting, coyotes yipping, and elk bugling. By day, we saw some of the famed horses while hiking. We also saw bison, prairie dogs, and so much more. This is one of the least visited national parks, but one of the best for wildlife viewing. It’s especially nice to see the wildlife without the crowds!

You may not picture Wind Cave and think it’s one of the best national parks for wildlife, but this park is about so much more than its underground mazes. In the cave, you may find a few bats. But the surface is where the true menagerie is found.

In my opinion, the trails, scenic drives, and overall surface of Wind Cave is the park’s best feature. While hiking or driving, you may see bison (some of the world’s purest genetic bison, in fact), elk, bighorn sheep, pronghorn, and deer in this ungulate showcase. Smaller mammals, such as prairie dogs and the reintroduced black-footed ferrets, are also found here.

Nearby Alternative: Badlands National Park has a similar species list (without the underground wonders).

Last on this alphabetical list, but certainly not least, is Yellowstone National Park. This geologic wonderland will always be considered one of the best national parks for wildlife.

Known as the American Serengeti, you’ll find a true variety in this corner of Wyoming. A huge highlight, hundreds of bison dot the meadows (or stand in the road and cause traffic jams). You also have the chance to see wolves, especially in the park’s famed Lamar Valley. Hayden Valley is another popular wildlife viewing spot. If you hope to see elk, visit the Mammoth Hot Springs area – they’re usually hanging around.

Nearby Alternative: Grand Teton National Park has similar species, and is located just down the road.

Plan Your Visit to Yellowstone and Grand Teton National Parks:

This site uses Akismet to reduce spam. Learn how your comment data is processed.

Hey there, and welcome to The Parks Expert! I’m Riley, and I think it’s safe to say that I kind of love national parks. One day, I hope to see them all.

Read more about me

The National Park Service is modifying its operations on a park-by-park basis. Before visiting, please check with individual parks regarding changes to park operations. The Parks Expert may not reflect all modifications resulting from the ongoing pandemic.

To help personalize content, analyze traffic patterns, and provide a safer experience, we use cookies. Unfortunately, they do not contain chocolate chips and you cannot eat them. By clicking on or navigating the site, you agree to allow us to collect information using cookies.I agreePrivacy policy